People who are crazy enough to think that they can change the world are ones who do.

‘The Invisibility Cloak’, one of the three ‘Deathly Hallows’, is one of the most amazing artefact in the ‘Harry Potter’ series. The cloak was used by James Potter (father of Harry Potter) and his friends to assist him in their mischief and then was gifted to Harry Potter by Prof. Albus Dumbeldore. Now, think about having one with you? No, we are not running a franchise of sellers 😉 , we are here to discuss the science behind it.

Well, physicists have listened to our prayers and are close to making one for us. Let us know how they are trying to achieve this mysterious goal – the goal to use science to defeat the eyes of viewer, just like an illusion created by a magician. This is possible by the use of ‘Metamaterials’, the materials which can bend electromagnetic radiation, such as light, around an object, giving the appearance that it was never there at all. Let us explore, how these metamaterials work.

Before we see how actual metamaterials work, let us look how bending light around objects can work in creating a camouflage to hide ourselves. We can accomplish this by simply using a plane mirror and two parabolic mirrors to reflect light around us. The incident waves are guided around the object without being affected by the object itself. The object becomes invisible from both the sides as can be understood with the help of the following ray diagram: 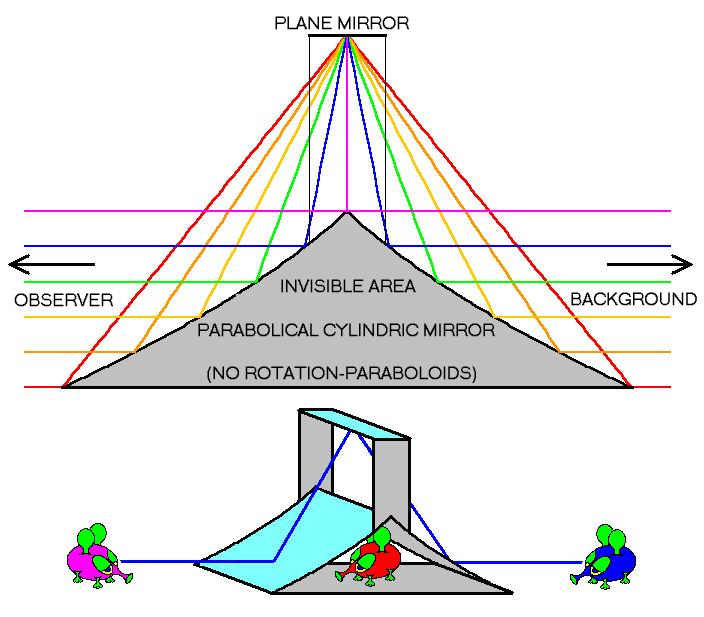 In a similar manner, metamaterial invisibility cloak will work by steering radiation in every direction. The tiny elements of the metamaterial pick up the rays from the far side of an observer and relay that ray around the material. Whenever the ray arrives at the side facing the observer, it is re-emitted in the direction it would have taken, as if the object was not there at all. Unlike the parabolic mirror, a metamaterial cloak does so in all directions.

Now we know that the “Invisibility Cloak” is after all not just a fantasy, but an achievable goal. What would you do if you become “Invisible”?

For more information about this topic, visit: https://en.wikipedia.org/wiki/Metamaterial_cloaking

An assemblage of nerve-wracking competitions, brainstorming guest lectures by some of the biggest names in the field of science, workshops based on latest technological needs, grand exhibitions to showcase technological advancement at its best, and food for thought for all, Tryst will leave every thinker, innovator and creator wanting for more.